A Year-Long Lesson in Indonesia

Bankers without Borders® volunteer, Calvin Liou deferred his dream so that he could volunteer at a women's microfinance bank in Banda Aceh. 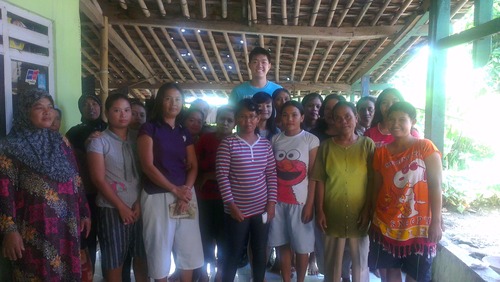 When he graduated with his master’s degree in Accounting Science, Calvin Liou seemed set to launch his career in investment banking and finance. He had carefully laid the foundation through summer internships and temporary employment with various prestigious investment banks. And now, Goldman Sachs had offered him a position in Hong Kong. Fortunately for Grameen Foundation, Calvin had other plans.

Calvin began volunteering with Grameen Foundation during his final semester of school in January 2012, translating documents from Chinese to English. When that project ended, he learned about a new opportunity to work with the foundation’s Capital Management and Advisory Center team in Indonesia.  Not wanting to miss this chance for hands-on microfinance experience, Calvin decided to pursue a “gap year” with Grameen Foundation.

Fluent in Mandarin, with a background in finance, Calvin quickly became an invaluable resource to Grameen Foundation’s Asia-based staff. He worked with several microfinance institutions and other organizations that serve mostly women.

“As the sole capital markets professional in Asia, my role was to bridge the gap between the regional team here in Asia and the capital markets team in Washington D.C,” he said. “I helped to manage relationships with our partners and helped execute transactions for Grameen Foundation and our partners.”

During his time there, he also noted the cultural differences in Indonesian business practices. “Unlike working in a Western environment, I have to be much more cognizant of undertones, context, and relationships in Indonesia,” said Calvin. “Because I don't speak Bahasa, communication is often lost in translation. Additionally, microfinance institutions are much less sophisticated here. When I asked one of our partners to send us their latest financials, I was told the next day that they had been sent.  I looked thoroughly through all of my emails, and was sure they had not sent them.  The next day, I received a DHL package with printed financial statements because they did not have them readily available in digital form!”

Calvin advises future volunteers to “be aware of your strengths and weaknesses, and get ready to step outside of your comfort zone.  Embrace it.  I would also advise volunteers to note that the experience is whatever they make of it – things often do not happen unless you make them happen in this sector.”