Matt Inbusch worked as an intern for Grameen Foundation’s Marketing and Communications team during the spring of 2012. What a moment to come back from the field! After three years as a Peace Corps volunteer in rural Peru, I briefly returned to my hometown of Columbus, Ohio, over the Christmas holiday, and then – probably a little too soon for my mother’s liking – bought a one-way ticket to Washington. I was fortunate to be offered an internship at Grameen Foundation’s headquarters, and jumped right into the day-to-day work of what I believe is one of the most innovative development organizations around.  My eight weeks at Grameen Foundation have given me a good perspective on the incredibly exciting crossroads facing the development “industry” in 2012. 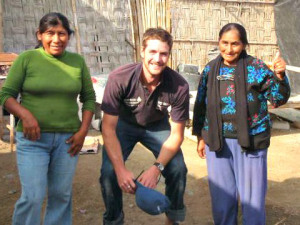 In his final year as a Peace Corps volunteer in Peru, Matt worked in Santa Lucia, a small village in the coastal department of Ica. He’s shown here with beneficiaries of the work he did as a rural-sanitation consultant, building eco-latrines and clean cookstoves for poor families as part of an earthquake-recovery project funded by the German government.

I was in for more than a few shocks upon my return to the US , but my own cultural readjustment pales in comparison to the changes that non-governmental organizations (NGOs), aid agencies and governments are making in response to new developments in developing countries. Actually that’s not the whole story; it’s really a two-way street, where unprecedented innovation is happening both from the top-down and from the bottom-up. The result is a total paradigm shift. I know I’m not the first to observe some serious flaws in the traditional development model, but I have to say I count myself very much among those who want more than the  “aid” concept, which – for most of the last 60 years – has meant hand-outs and feel-good solutions, rather than a hand up and a focus on organic, sustainable systems. That’s why it’s so exciting to be getting my feet wet in this space right now. Technological innovation, market-based strategies and a growing public consciousness are combining to drive game-changing approaches that I see in three big 2012 headliners: David Roodman, KONY and Occupy.