Asking the Right Questions Makes All the Difference

Sally Salem was an Atlas Corps Fellow at Grameen Foundation, where she worked with the human capital management team for a year learning and designing toolkits to support the strategic adoption of human capital practices at microfinance institutions.  Sally has more than a decade of experience in non-formal education and development and has worked with adults and young people on issues ranging from youth participation, volunteering, intercultural learning and human-rights education. After working with Grameen Foundation’s Human Capital Center for a year as an Atlas Fellow, it was time to return to Egypt.  Looking back now on my year-long stay, I realize that I was lucky to have had Grameen Foundation as my host and to have worked with the human capital management team. Thanks to good timing, one month after my fellowship ended, I had an opportunity to put all the theory I had learned into practice. I was invited to support an engagement with the Lebanese Association for Development-Al Majmoua, a leading microfinance NGO in that country, part of a collaborative effort between Grameen Foundation's Human Capital Center and Grameen-Jameel Microfinance Ltd., a joint venture between Grameen Foundation and the ALJ Foundation, a subsidiary of the Abdul Latif Jameel Group.  My task was to help facilitate a human capital management assessment – the starting point for aligning an organization’s people practices with its business strategy.  As a native Arabic speaker with working experience in Lebanon and deep familiarity with the assessment, I was eager to volunteer my services through Grameen Foundation’s skilled-volunteer initiative, Bankers without Borders®. 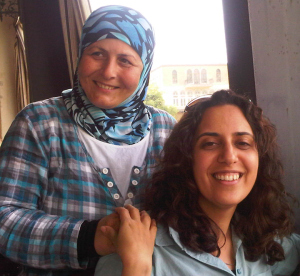 In Sidon, Lebanon, Sally (right) met Osama – a photographer and Al Majmoua client – who is carving out a niche in her city’s male-dominated photography industry.

Lebanon has an interesting (and somewhat tragic) modern history that some say sums up the story of the Middle East in the last 60 years or so. It is a country with a strong Phoenician heritage – sea people who made great ships using their mighty cedar trees and who explored the unknown Mediterranean at a very early stage of human history. This is still reflected in the adventurous character of today’s Lebanese people. There are more Lebanese outside of the country than in Lebanon. They are known for their entrepreneurial spirit, and wherever they go they prove to be clever merchants, excellent hosts and good cooks! What a great environment for microfinance to thrive and grow.

It was incredibly enriching to participate in the assessment and to see loan officers, analysts, branch managers and all these “roles” I had been reading about for a whole year finally breathing and talking in their local environments. It felt like completing a puzzle in my head, especially because the issues we tackled were very similar to those I had read about at other microfinance institutions and in other countries. Meeting the borrowers was also interesting. In Sidon (roughly 24 miles away from Beirut), we met Osama, an energetic woman who works as a professional photographer. Although photography is a predominately male profession in Sidon, Osama decided to take out a loan from Al Majmoua to pursue her dream of becoming a photographer. It was amazing to see her carry around and switch between the very heavy cameras as she took photographs. Osama takes photos of the places and events where men cannot go, such as women-only pre-wedding parties (girls’ henna nights), where women take off their veils and everyone dances. Her success has enabled her to buy more cameras to expand her business. In the mountains, we visited a branch in Metn, where we met some women who were just applying for their first loans (the loans are given to each individual, but there is joint liability for the group). The borrowers in the group were from different religious communities – one was actually from another country, Syria.  As I looked at the group, I thought of the 15-year civil war that had devastated Lebanon. The country has made great strides since the conflict ended in 1990, but there is still a lot to be done. Al Majmoua is well aware of this cultural context, and during our interviews with staff there was a common theme – employees felt appreciated for what they brought to the organization, regardless of their background.  This point is worth emphasizing in a country like Lebanon, which has been ravaged by sectarian conflict. Albert Einstein once said, “If I had an hour to solve a problem and my life depended on the solution, I would spend the first 55 minutes determining the proper questions to ask, for once I know the proper questions, I could solve the problem in less than five minutes.”  Grameen Foundation’s human capital management work follows a similar approach in serving client organizations. We interview staff members from all levels of the organization to identify the current state of their practices and the gaps between the current and the desired state.  Then we develop a roadmap of priorities to align those practices with the business strategy. During our meetings with Al Majmoua’s staff, we carefully selected each question, tailoring them to each target group.  This was coupled with setting the right mood, to make the participants feel comfortable enough to share their ideas, opinions and concerns, but without influencing their answers. My experience at Al Majmoua confirmed what I had already learned at Grameen Foundation’s headquarters in Washington, D.C. – field officers and middle managers are at the heart of the microfinance industry. Their responsibilities are physically and psychologically demanding, and they work under difficult conditions. Their success requires the best human capital-management practices from their organizations. Meeting people who work on the front lines and behind the scenes – along with those who benefit from their service – helped to give me a new perspective on microfinance. I now have a better appreciation for all the hard work of the people working behind computer screens in D.C. who strive to end poverty and touch real lives from a distance. It is definitely worth it and, as I’ve seen first-hand, it pays off in the end.