CHRONICLES OF A BWB VOLUNTEER IN CHENNAI, INDIA -- FINALE -- Part 3 of 3 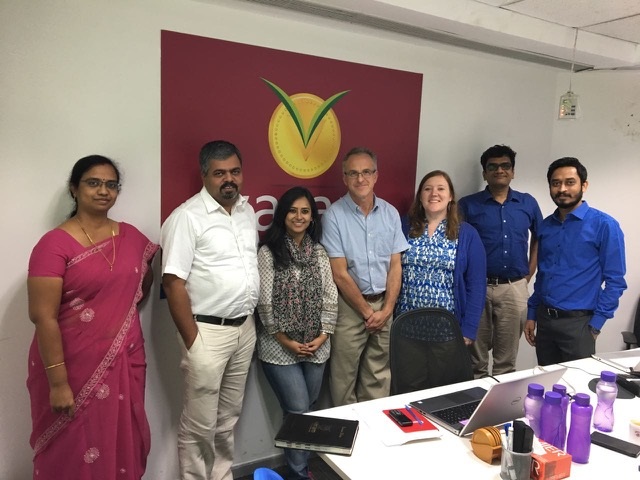 Friends…Some final thoughts from my India volunteer assignment, (ok more than a few thoughts, it’s a bit longer than the others)……

The advantage of having previously spent valuable time in India, combined with the access to the really smart and insightful people at Varam Capital where I was volunteering, allowed me to partially peel away at the complex onion which is India and Indian society.

In this case, it was interesting to get a range of perspectives and to hear about some of the challenges behind the otherwise huge success of the Grameen lending model in the developing world.  To be sure, the Grameen lending model is brilliant in its elegance and simplicity, and has literally raised hundreds of thousands of women, if not millions, out of dire poverty.  $Billions have been lent to women in increments of $200 or $300 or $500.  The idea of taking a very large and dramatically ignored segment of society, and then mobilize capital by creating a loan process which minimizes lending risk, is financial engineering and innovation at its best.  Previously, banks understandably found it unattractive and unaffordable to provide tiny $ loans to people on the margins of society, let alone deal with the riskiness of these loans.  Grameen’s innovation of gathering women into larger groups, requiring that they support each other and mutually guarantee the entire loan (thus utilizing social capital), adding training to empower them as they launch cottage businesses, is a powerful solution to the traditional bank issues of risk and scale.

Yet after some 30 to 40 years, this model seems ripe for innovation (particularly in today’s digital landscape).  I heard critique that this JLG (joint liability group) lending model has not seen significant innovation in decades.  Also, it has only penetrated some 40mil people in India out of a total potential market of some 500mil low income people seeking some employment (if I have my numbers correct).  I am by no means an expert, but rather sharing with you some interesting observations I heard in my various meetings and discussions.  What was most interesting to hear was how the Grameen success and fame has also invited unintended consequences which are now hampering it from meeting its objectives.

As in any economy, one goal of supporting micro-businesses and start-ups is to eventually graduate a few to the next level.  Realistically 10% to 20% of these cottage businesses should emerge into healthy small businesses that can not only generate income to support a family, but also employ others and add broader value to a community.  But currently there appears to be no graduation path for the winners within the JLG model.  Several banks in the developing world have tried to crack this problem and extend larger loans to the successful JLG borrowers… but none of these efforts have apparently succeeded yet.  Women join a group and borrow $400 or maybe even $800, and repay it dutifully, but eventually hit the credit ceiling as they try expand their business.

The unintended consequence of the JLG model is that structurally the program may be preventing women from growing their businesses…(or maybe it hasn’t solved that problem just yet).  One problem that arises relates to the fact that loans are awarded to a group, therefore lenders have not collected payment behavior data on any of the individual women.  So creating any kind of individual credit score (like a FICO) has been thwarted.  Even if individualizing the data were possible, the loan structure at its core is group oriented, so what happens when one women falls behind one month, the other women in her group will pay her part to avoid any possibility of ruining their loan and their group’s credit status.  What this means is that organizations like Varam, who see the potential of data models and data science, have found it difficult to develop larger $ loan programs for women as they still lack any formal credit records or data.

This was one of the big challenges for Varam, and I worked with them to brainstorm and generate loan ideas to test.  Yet we continued to run into obstacles.  Business lending requires some record-keeping on the part of the business owner, which is direly missing within these womens’ businesses, and it also requires some small business lending acumen on the part of the lenders, which is generally absent given the fact that this skill is not needed within the JLG lending practice.  JLG loans mainly rely on peer-pressure, not business success.  Needless to say, the challenges are many.

Another unintended consequence of the JLG system lies within the highly local nature of the lending practice.  To recruit 20 women at a time who are willing to guarantee each other, requires hiring local branch managers that are very familiar with their communities.  What has emerged in some areas is that these local branch managers have accumulated significant power to the extent that they can personally extract loan fees from women borrowers (or defraud them).  These women dare not divulge wrong doing to any lender’s head office for fear that they will be the subject of retribution when the local branch manager hears of the complaint.  After all, many of these women will come to rely on these loans to support their businesses, so the local branch manager has serious decision-making power over them.  Several notable frauds of this nature have occurred within JLG lenders, shaking the reputation of the model.

Another eye-opening consequence was when I heard about some of the family dynamics.  In the last decade billions in capital has being thrown at women groups, as evidence mounts that women are a very financially responsible market segment.  All the while, small business lending to men is being ignored.  As you can imagine, there are complex implications to the traditional family power dynamics.  For example, it is not uncommon for a wife to be ushered out by her husband to apply for a JLG loan to support the man’s business (a good reason, I guess), or to support a man’s debt or other liability (not as good a reason).  These family dynamics are complex and hard to uncover.

Pondering India and this theme of “unintended consequences” has gnawed at me during my stay here.  Obviously the American democratic system we boast about has its unintended consequences too, which were on loud display (or should I say BIGLY) during this last painful election cycle.  Meanwhile here in India - - a country that often compares itself to China, the world’s other billion+ country - - newspapers last week reported how China has managed to narrow its income disparity and lift hundreds of millions out of poverty.  Its economic policy has been to invest in infrastructure and propel its manufacturi

ng base forward as millions flock from rural areas to the cities.  China boasts a recent 4% urban unemployment rate.  At the same time, the comparative graph showed India with a dramatically lower GDP per capita (though significantly increased over the last 20 years) and also a much wider disparity of income.  Yet on the next day, the front pages were filled with news of the India space program successfully launching 100+ satellites simultaneously, setting all kinds of records, and sending China a “wake-up call” in the race for space supremacy.  This is certainly an important and proud achievement for India, but are there unintended consequences, I pondered?  While India focuses on its IT and engineering talent to the advancement of the 1% highly educated IT population, does it leave its masses and illiterate behind?** 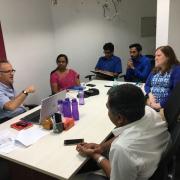 Everywhere I traveled I found extremely hard working people living on meagre wages, from the women weaving saris from morning to night; to the dining room staff in our hotel who literally worked from 6am till past midnight; to one of our drivers who did not feel it unreasonable for his boss to require him to be on the road driving 30 days per month sometimes relying solely on tips, with no base salary; to the construction workers in our building who were banging down walls and pouring concrete without a thread of protective gear, in fact without even shoes on their feet, and so many more.  Yet in so many of the conversations, there was an uncanny level of acceptance; only infrequently did I find any need or hope or path to improving their way out of their situation.  (When we asked our hard working, smart, service-oriented driver if he considered learning to be a tour guide (earning much better wages), he looked at us almost blankly and simply said “No time.”)   Such a remarkable country... Yet so many still suffer from huge unemployment and dire poverty; this question troubled me.  Is this an unintended consequence of India embracing centuries old Hindu traditions and the lingering remnants of the caste system which in part is about men following the job/profession of their father?  Or is this due to poor and corrupt political leadership currently?  Or are these just naive observations from a western perspective?

Worth pondering for another day.

** To illustrate with another example, papers reported that the India govt spent only 1% of GNP on citizens’ health care, compared to the world average of 6%.