Connecting the Dots – From Seraphina to Prime Minister Odinga

Shannon Maynard is Director of Bankers without Borders®(BwB), Grameen Foundation’s skilled-volunteer initiative. Maynard has more than 15 years of experience in nonprofit management and volunteer mobilization. Before joining Grameen Foundation, she served as Executive Director of the President’s Council on Service and Civic Participation, and managed strategic initiatives for the Corporation for National and Community Service, a federal agency. This is the final post in a four-part series; you can read her first post here, her second post here, and her third post here. 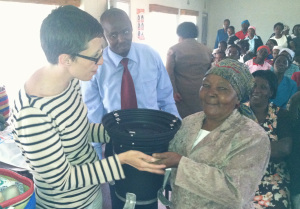 BwB Director Shannon Maynard (left) presents Seraphina (right), a women's group leader and entrepreneur, with a cook stove that the other group leaders purchased as a thank-you for her wisdom and leadership to them.

As a U.S.-based employee of a global NGO, the small amount of time I spend in the field is incredibly helpful in checking assumptions around what’s possible and what’s needed with our work in particular places, and in gaining a better understanding the realities of my employees based there. Of course, being surrounded by abject poverty on a daily basis, combined with getting to see – in person – the hope and progress that takes root in poor people’s lives when they gain access to credit or savings, redoubles my own personal commitment to the work of Grameen Foundation and Bankers without Borders (BwB). In addition to gaining such perspective during the two weeks I spent in Kenya, I was able to help better position BwB to benefit Kenya-based social enterprises such as the Visionary Empowerment Program (VEP), Paradigm Kenya and Paddy Micro Investment, among others. I also had the chance to shake hands with two very important people: Kenya’s Prime Minister Raila Odinga, and self-identified industrialist Seraphina, an elderly woman who lives in a rural village outside Thika town and makes soap to support herself and her family. What do these three social enterprises and these two people have in common? Let me connect the dots – because that really is what Grameen Foundation is all about. We bring together the people and facilitate the collaboration required to foster significant, scalable financial- and information-related solutions for the world’s poorest.